Wasta and Nepotism; a crime without punishment 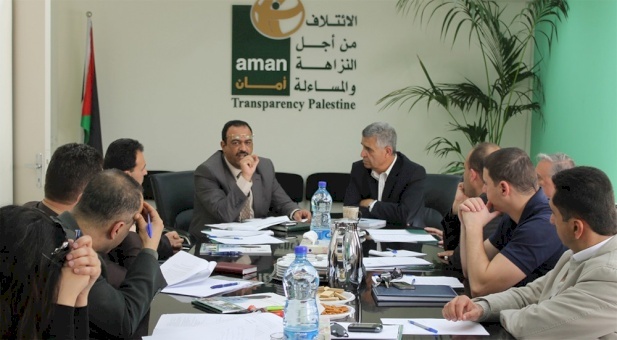 Dr. Azmi Al Shuaibi, AMAN’s Anti-Corruption Commissioner, had initiated the workshop by saying that: “According to data collected through successive polls conducted by the AMAN Coalition, the crimes of Wasta and Nepotism account for the highest corruption rate among all other forms of corruption currently rampant in the Palestinian society. Nevertheless, despite the above, and the fact that the 2010 Anti-Corruption Law has criminalized the Wasta and Nepotism offense and sentenced its offenders to a 3-15 years imprisonment; however, as of date, the Palestinian judiciary system is yet to issue a ruling to penalize the perpetrators of this crime. This grave concern, as well as the incessant widespread of this phenomenon, is what prompted AMAN to conduct this study as part of its effort to unearth the obstacles which hinder the applicability of the pertinent sections of the Law. In view of the previous findings, and with the consensus of the workshop participants, this study has concluded the following:
1. Amend the text of the Anti-Corruption Law provisions that pertain to the crimes of Wasta and Nepotism, so as to remove any confusion or misconception involving this crime and the crime of bribery.
2. Reevaluate the penalty for Wasta and Nepotism offenses; instead, settinga penalty that is better suited to the nature of the crime, and removing this crime from the jurisdiction of the Criminal Division.
3. Stipulate a clear punishment for attempting the crimes ofWasta and Nepotism, declaring it a misdemeanor if need be, so as to minimize the prevalence of this crime and to fight against it.
4. The legislator must refrain from attempting to define Wasta and Nepotism, in effect, leaving this task to the judiciary and jurisprudence system; as the definition of criminal offenses is not within the jurisdiction of the legislator.
5. Promote a social culture that opposes Wasta and Nepotism, both within society and especially among the ranks of the employed.
6. Introduce an e-business model to public services positions, so as to eliminate any opportunity for the crime of Wasta and Nepotisim to take place.