On the occasion of the International Anti-Corruption Day: Academics against Corruption calls for establishing an academic lobby group to fight corruption 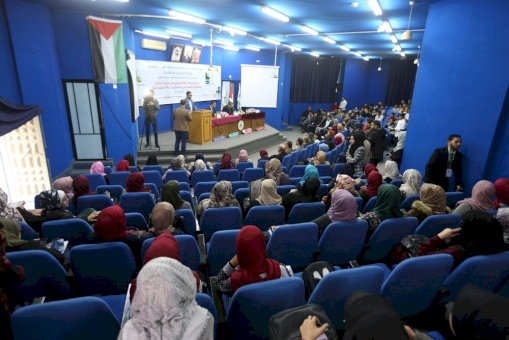 Gaza – In collaboration with the Faculty of Media at Al-Aqsa University, the Academics against Corruption Network organised a seminar on the occasion of the International Anti-Corruption Day. The network called for creating an academic lobby group to fight corruption, promote anti-corruption education in Palestine based on an authentic unified discourse, which stands at the frontline of the war on corruption.

At the conclusion of the seminar, Academics against Corruption stressed the importance of strengthening the role of academics and universities in creating an enabling environment for integrity and accountability and developing multiple anti-corruption tools. In a first stage, an awareness raising campaign will be launched, targeting students and consolidating the concepts and values of integrity and fight against corruption. Students will be encouraged to do focused research on anti-corruption activity, including monitoring and documentation. A course on integrity and transparency in the anti-corruption effort will be incorporated into the curriculum of Palestinian universities. A second stage will initiate cooperation and build partnerships with Palestinian universities, encouraging them to explore corruption through academic research. Students will be allowed room to investigate cases that unveil unfair practices in public service delivery. Mechanisms will be promoted to help students provide monitoring and disclose their own information. Workshops, seminars and brainstorming sessions will be organised at universities. A quarterly will be launched to publish students’ research on the fight against corruption.

The idea of establishing Academics against Corruption has been proposed by the Coalition for Accountability and Integrity (AMAN), which believes in the effective and pivotal role academics can play in the fight against corruption. Academics against Corruption is a voluntary group. It brings together a number of active Palestinian academics and researchers, who have expressed their firm commitment and willingness to work for the network, adopt its values, mission and vision, and make every effort to achieve its goals. Academics against Corruption has developed a set of goals, most notably, expanding the participation base for the anti-corruption effort, disseminating the values of integrity, principles of transparency and systems of accountability, fight corruption among the youth, incorporate anti-corruption activity into the curriculum, raise university students’ awareness of corruption, encourage students to produce research papers and studies on corruption cases, and stress the importance of accountability as a leverage for promoting the values of integrity and transparency.