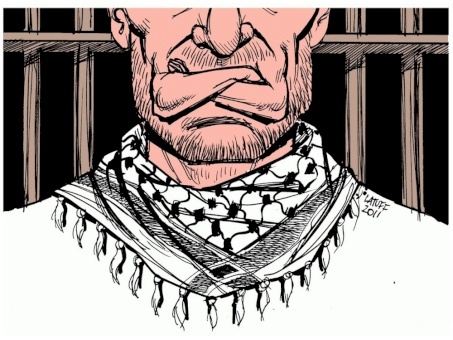 23 May 2017
Your Excellency Mr. Antonio Guterres,
Secretary General of the United Nations


The Palestinian Civil Society Coalitions and Networks call your attention to Israel’s continued violations of the rights of over 6000 Palestinian political prisoners, who have long been denied their basic rights, and are currently undergoing a hunger strike. After 37 days of their strike, it has become obvious that Israel, the occupying power, is unwilling to fulfill its obligations toward protected persons, including prisoners. Thus, we are urging you to immediately act through urging the UN agencies and bodies, member states and international organizations to ensure international protection of the political Palestinian prisoners and hold Israel accountable for its violations of and non-compliance with international law rules and norms.

Since the Israeli occupation of Palestinian territory in 1967, Palestinians have been charged with offenses under Israeli military law and tried in military courts which undermine basic due process and fair trial rights. Over the last 50 years, an estimated 800,000 Palestinians have been arrested by the Israeli Occupation Forces (IOF) in the West Bank, including East Jerusalem, and the Gaza Strip. This constitutes approximately 20 percent of the total Palestinian population in the OPT, and as much as 40 percent of the total male Palestinian population. As of March 2017, there were approximately 6,300 Palestinian political prisoners in Israeli prisons and detention centers, including 500 administrative detainees held without charge or trial. These arrests and detentions take place within the context of other Israeli policies and practices that are used as a means of repression and control of the occupied Palestinian population.

Palestinian political prisoners face widespread and systematic torture and ill-treatment from the time of arrest, and throughout their detention. Israeli measures taken against Palestinians include: sleep deprivation; solitary confinement; inhuman detention conditions; excessive use of blindfolds and handcuffs; physical abuse; denial of food and water for extended periods; denial of access to toilets; denial of access to showers or change of clothes for days or weeks; exposure to extreme cold or heat; and sexual abuse.

The demands of Palestinian Hunger-Strikers:
1 - The installation of public telephones in all prisons and sections in order to
communicate with their families.
2 – Visits:
2.1 - Re-instate the second monthly visit which was stopped by the Red
Cross.
2.2 – Ensure regularity of visits every two weeks.
2.3 – Relatives of first and second degree should all be allowed to visit.
Accordingly, children and grandchildren under the age of 16 should be allowed in.
2.4 - Increase the duration of the visit from 45 minutes to an hour and a half.
2.5 - Allow prisoners to take photographs with family visitors at least once
every three months.
2.6 - Family visitors must be treated with respect by prison administrators.
3 - Medical Treatment:
3.1 - Close the so-called "Ramla Prison Hospital" for failing to provide the
necessary treatment.
3.2 – Provide prompt, adequate health care services, and ensure
accountability in cases of medical negligence.
3.3 – Conduct periodic medical examinations.
3.4 - Perform surgeries on a timely and as-needed basis
3.5 – Allow visits by specialized international doctors.
3.6 - Release of sick prisoners, especially those with disabilities and chronic
diseases.
3.7 – Provide free health care to prisoners.
4 - Address the needs and demands of Palestinian female prisoners, including by
providing private transportation during transfers, and allowing family meetings to
be conducted without a barrier.
5- Transport:
5.1 - Ensure the humane treatment of prisoners during their journeys by bus.
5.2 – Promptly return prisoners to prisons from clinics and courts.
5. 3 - Prepare the crossings for human use and providing meals.
6 - Add satellite channels suitable for the needs of prisoners.
7 - Install air conditioning in prisons, especially in the prisons of Megiddo and Gilboa.
8 – Install kitchens in all prisons, which are under the supervision of Palestinian prisoners.
9 – Allow books, newspapers, clothing, food and other items to be given to the prisoner during visits.
10 - End the policy of solitary confinement.
11 - End the policy of administrative detention.
12 - Permit prisoners to take courses through the Hebrew Open University.
13 - Allow prisoners to take the Tawjihi (high school) examinations in an official manner.

As a result of the hunger strike, Palestinian prisoners have been subjected to violent and coercive measures by the Israeli Prison Service and special units to coerce prisoners and detainees to end their hunger strikes. Some measures that have been implemented against hunger-strikers include: isolation; denial of family visits for two months; denial of legal visits and group prayers; disciplinary fines of 200 NIS; the confiscation of salt by prison administration; and requiring prisoners to drink tap water rather than the usually-provided for drinking water. Hunger –strikers are also prohibited from washing their personal clothing and undergarments, and have been stripped of their possessions. Only one blanket has been kept for each prisoner, and one set of clothing in addition to their “Shabas clothing” or prison uniform. Today, prisoners and detainees entered their 37 day of hunger strike. Although their health condition continues to deteriorate and some prisoners have lost consciousness, medical examinations carried out by the IPS have been insufficient.

The continued deterioration of the health of Palestinian hunger strikers, within the larger context of Israeli policies and practices that violate the basic rights of detainees (ranging from torture to administrative detentions) require immediate attention. The Palestinian Civil Society Coalitions and Networks highlight the need to intervene and calls for the immediate protection of these prisoners and detainees, long-denied basic rights. We call upon you, and the international community at-large, to demand that the Israeli government respect the will of the hunger strikers


who use their bodies as a legitimate means of protest. On 16 May 2016, United Nations Special Rapporteur on OPT Michael Lynk drew attention to Israeli violations of Palestinian political prisoners’ rights including, the use of administrative detention, solitary confinement, denial of access to attorneys and denial of family visitation rights. We urge you take an official position in line with the Special Rapporteur recommendations and findings, and ensure accountability for these violations.