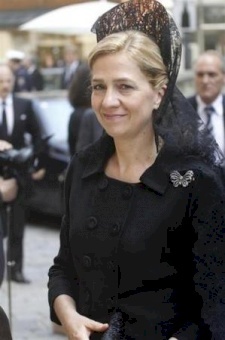 Madrid, Spain (CNN) -- It is expected to be a court date like no other, with Spaniards riveted to a financial corruption case that involves members of the royal family.
On Saturday, Princess Cristina, the youngest daughter of King Juan Carlos, will be the first direct member of Spain's royal family to testify in court while facing preliminary charges for a crime, Spain's royal household has confirmed.
Her husband, Inaki Urdgangarin, faces preliminary charges in the same matter and already testified, a year ago. The case centers on his nonprofit Noos foundation that received millions of dollars in government contracts to stage sports and tourism events.
Judge Jose Castro is investigating whether part of that money was diverted for private use by the princess, who is 48, and her husband, 46. Through their legal teams, both deny any wrongdoing.

The closed-door testimony for the princess will be held at a local court in Palma de Mallorca in the Balearic Islands. The courthouse is not far from the Marivent Palace, the royal family's summer residence on Mallorca, one of Europe's top tourist destinations.
Judge Castro last April leveled preliminary charges against the princess in this case, but they were dropped in May after prosecutors appealed to a provincial court, citing insufficient evidence.
But Castro continued his investigation and last month issued a 227-page order, again bringing preliminary charges against the princess, for alleged tax fraud and money laundering through a separate company, Aizoon, in which she had a 50% stake, with her husband holding the rest.
"They used that company to pocket the public money and also to pay the lowest possible tax or simply cheat the Treasury," said Eduardo Inda, investigations editor at El Mundo newspaper who co-authored a book, "Urdangarin," about the alleged financial improprieties.
"In that company, Princess Cristina is the one who signs the annual reports," Inda said.
When the new preliminary charges were filed in January, Cristina's top lawyer, veteran politician and defense attorney Miquel Roca, told reporters they would appeal.
But a week later, there was a sudden change of position, and it was announced that the princess would testify.
The about-face was not due to pressure from the royal household, but instead was a personal decision by the princess, who persuaded her defense team on the issue, said an official familiar with discussions within the royal household, who spoke on condition of anonymity.
"It was her decision to testify, simply because she has nothing to hide, and she's convinced the preliminary charges could be dropped, and it's better to testify than let the idea of cowardice be out there," the official said.
The preliminary charges eventually could be dropped, but a filing of indictments would set a trial in motion.
The case is one of various financial corruption scandals affecting the royal family and major political parties and a leading union, during the economic crisis, when many Spaniards have lost jobs or had to tighten their financial belts.
Princess Cristina's testimony comes as a new report by the European Commission shows that 95% of Spaniards say that corruption is widespread in the nation.
The royal household two years ago excluded Princess Cristina and her husband from representing Spain at official functions, like one this week in Madrid, when the King, Queen Sofia, Crown Prince Felipe and his wife, Princess Letizia, welcomed the foreign diplomatic corps.
But some Spaniards say the princess is still getting special treatment.

"It's great they're finally bringing preliminary charges," said student Mariana Moragrega, outside the royal palace in Madrid. "But considering she's the King's daughter, she'll be very protected, and won't go to jail."
A columnist for El Pais newspaper, Ernesto Ekaizer, predicts the testimony on Saturday could be the beginning of the end of the case against the princess. He writes that the judge again faces opposition from a prosecutor who says there's still insufficient criminal evidence against the princess. And that the case may be dropped before reaching trial.
Carlos Cruzado, president of the Gesta union of tax agency technicians who work at the Treasury Ministry, said it's unusual for a prosecutor to seemingly side with the princess, who's facing preliminary charges of tax fraud, instead of standing up for the interests of the nation's tax collection agency.