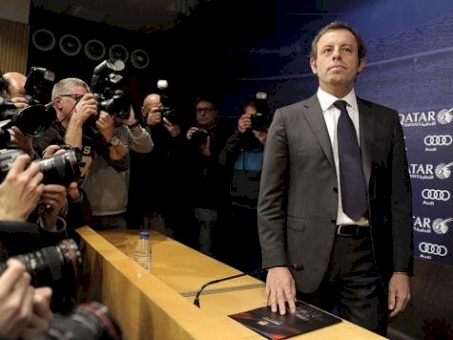 Not too long ago, FC Barcelona president Sandro Rosell celebrated the signing of Brazilian superstar Neymar for €57 million, mocking archrival Real Madrid for paying more than €90 million for Gareth Bale.  On Thursday, Rosell presented his resignation after a federal judge began legal proceedings to potentially indict Rosell of embezzlement after an investigation revealed FC Barcelona actually paid a total of €95 million to sign the Brazilian striker, with a big chunk of that going into hidden contracts that stipulated substantial fees for the footballer’s father and former club Santos FC.

“My era here is over,” Rosell told reporters in a press conference Thursday at Camp Nou, as he announced he had submitted his “irrevocable” resignation to the board of directors.  “I don’t want unjust attacks to negatively affect management and the Club’s reputation,” Rosell added, before presenting his right hand man Josep Maria Bartomeu as Barҫa’s new president.

Rosell’s resignation is a direct consequence of what has come to be known as the “Neymar case” in the Spanish media.  On Monday, Spanish daily El Mundo reported that FC Barcelona had indeed paid €95 million to sign Neymar, the highest figure ever topping the €94 million paid for Cristiano Ronaldo and the €91.5 million for Welshman Gareth Bale by Real Madrid.  That same Monday, Rosell stuck to his guns, reiterating the club had paid €57 million for the Brazilian striker while urging Judge Pablo Ruz to call him in for questioning.

That prompted Barҫa socio (a member of the club, as FC Barcelona is a sort of non-profit members club) Jordi Cases to start legal proceedings against Rosell, which Judge Ruz admitted.  After reviewing certain documents, Ruz accepted that he had sufficient cause to investigate potential “simulated contracts” that evidenced a discrepancy between what was stipulated in those, and what services were ultimately received in order to mask certain payments.  Speaking to the Spanish press, Cases’ lawyer Felipe Izquierdo said they would extend legal action to incoming president Bartomeu, and possibly Javier Faus, economic vice-president for the club.

According to El Mundo, Ruz is reviewing a series of contracts signed between 2011 and 2013.  The first of those stipulates FC Barcelona will pay €40 million to Neymar & Neymar (N&N), an entity controlled by Neymar and his father, for the athlete’s services.  Then, in 2013, well after Neymar had already been officially presented as an FC Barcelona player, the club signed four contracts with the star’s father, none of which were contingent on those services actually being delivered.  Neymar da Silva, Sr. would receive €4 million for bringing in Brazilian sponsors, €2 million to find “new stars” in his son’s former club, Brazil’s FC Santos, €2.5 million to use for charitable causes in Sao Paulo, and €2.6 million as a “commission” on a further imaging contract between Barҫa and Neymar Jr.

Furthermore, the Catalan club agreed to pay Santos FC a €17 million transfer fee, a €10 million signing bonus, €9 million for two friendly matches, and €7.9 million for a special preference on three of the team’s players.  All in all, FC Barcelona paid €95 million to bring Neymar on board.  Santos FC president Odilio Rodrigues Filho said that if Barcelona indeed paid a higher sum for Neymar, they would seek full payment for their stake, as the Brazilian club owned 55% of the star’s transfer rights.  Toning it down a bit, Rodriguies noted that his club would not make any comment on the situation until the Spanish judicial authorities ruled on the case.

“Over the past few days, unjust accusations of embezzlement have led to legal action against me in federal court,” Rosell told reporters on Thursday, “from day one I’ve claimed that Neymar Junior’s signing was the right thing to do, sparking desperation and envy from some of our adversaries.”  Rosell spoke of “threats and attacks” against him and his family, adding, “the socios’ right to be informed has to be compatible with defending this club, and the confidentiality of certain matters […] as those could be detrimental to our club.”

Beyond what was paid to bring Neymar on board, Barcelona has given the Brazilian star a juicy contract that could even outstrip the team’s major star, Argentine striker Lionel Messi.  According to El Mundo, Barҫa signed a €6 million a year work and imaging contract that could rise all the way €15 million if the team achieves certain collective goals such as winning La Liga, the UEFA Champions League, and the Copa del Rey, along with Neymar personally getting the Ballon D’Or which FIFA gives yearly to the world’s best player.

Judge Ruz is now reviewing further documents, and has requested additional information from several parties.  Ruz, who at the time said there is no “urgency or necessity” to call Rosell to testify, has asked FIFA for all documentation regarding Neymar’s signing, while asking the player himself to provide the contract between N&N and Barcelona.  He’s also requested that Barҫa provide documentation about all contracts signed with FC Santos, and Brazil’s soccer federation for information on the superstar’s transfer.