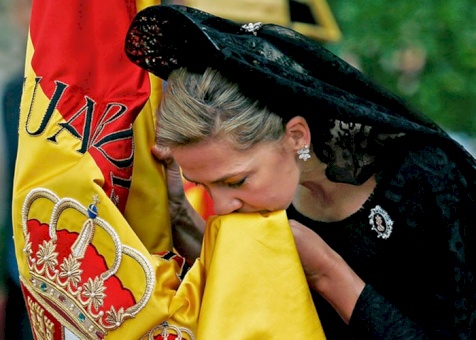 Spain’s royal family suffered a fresh blow on Tuesday after the king’s younger daughter was named as a formal suspect in a long-running corruption probe that has tormented senior members of the royal house for more than two years.

According to a court filing released by the investigating magistrate, Princess Cristina Federica de Borbón y Grecia is suspected of money laundering offences and tax evasion, and will have to testify on March 8. The princess will become the first direct member of the royal family to appear in court as a formal suspect since the restoration of the monarchy almost four decades ago.
The legal woes engulfing the daughter of King Juan Carlos come at a particularly sensitive time for Spain’s royal family, which has been shaken by a series of missteps and scandals, but also by speculation over the king’s recent frailty.

Polls show that a growing number of Spaniards are turning against the king, and want Juan Carlos to abdicate in favour of his more popular son, Crown Prince Felipe. A survey released by El Mundo newspaper on Sunday found 62 per cent of respondents would like the king to step aside, up from 45 per cent last year. Close to 70 per cent said they thought the king was unable to restore the monarchy’s prestige.

At the same time, more and more Spaniards say they want to abolish the monarchy altogether – a trend that mirrors the broader decline in public acclaim for institutions such as the judiciary, parliament and the political parties. The poll released on Sunday found that less than half of respondents wanted Spain to remain a constitutional monarchy, the first time support has dipped below the 50 per cent mark.

On Monday, the king made his first public appearance since undergoing hip surgery in November. Still on crutches, the 76-year-old monarch appeared to lose concentration several times during his annual address to mark the military’s Christmas holiday celebration. His halting performance, widely shown on television and newspaper websites, offered perhaps the starkest illustration yet of the king’s advanced age and physical ailments.

The filing on Tuesday is the second attempt by Judge José Castro to implicate Princess Cristina in a corruption and embezzlement case that centres on her husband Iñaki Urdangarin, a former Olympic handball player. The king’s son-in-law is alleged to have embezzled millions of euros in his role as head of a not-for-profit foundation that organised conferences and provided consulting work for regional and local governments in Spain.

Princess Cristina was a member of the organisation’s board, prompting Judge Castro to name her as a formal suspect in the case in April. He argued at the time that there were “serious doubts” that she knew nothing of her husband’s activities, but the decision to name her as a suspect was ultimately overturned by a senior judge.
The latest legal move against the princess is based on a different set of allegations, however, namely that she may have violated laws against money laundering and evaded tax on earnings linked to the organisation.

There was no detailed response from the royal family to the latest allegations, only a statement saying that “we respect the judicial decisions”. The princess and Mr Urdangarin have repeatedly denied any wrongdoing.

The direct threat of criminal sanctions aside, the embezzlement case has also undermined the standing of Spain’s royal family by turning up a wealth of private emails and communications between members of the royal family.


Leaked to the Spanish press, several of the messages have shown the family in an unflattering light by revealing, for example, attempts by the king’s associates to find employment for Mr Urdangarin. Among the leaked messages were also a series of crude and sexist joke emails sent by Mr Urdangarin himself, some of which lampooned other members of the royal family such as Princess Letizia, the wife of the crown prince.