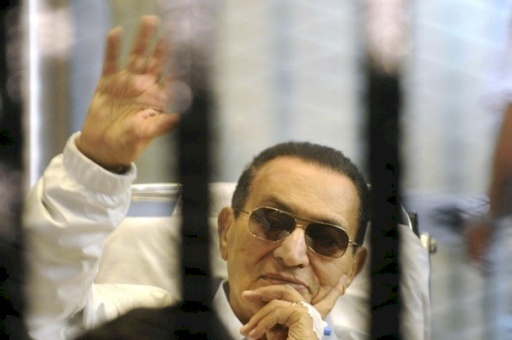 CAIRO — Egypt’s deposed President Hosni Mubarak will remain in custody on new corruption charges, despite a court order to release him before his retrial over the killing of protesters in the uprising against him, Egypt’s state news agency said Monday.

The order by the Cairo Criminal Court followed Mubarak’s request to be released after two years in detention without a final verdict. The court said Mubarak could be released on bail if he is not wanted for any other court cases

Prosecutors then pointed out that Mubarak has three other cases pending, and he will be held on the basis of those charges despite Monday’s decision.

The 84-year-old Mubarak has been in detention since 2011 for trial in the main case against him — responsibility for the killing of nearly 900 protesters during the uprising. Most of those were killed in the early days of the revolt that started on Jan. 25 and ended with his stepping down on Feb. 11.

Mubarak was taken into custody in April 2011. He was the first Arab leader to appear in a defendant’s cage, on trial by his own people. On June 2 2012, he received a life sentence for failing to stop the killings. Then he won an appeal in January this year, canceling the sentence on grounds of shoddy procedures. A retrial was ordered.

The new trial convened Saturday, but the judge recused himself, forcing a delay. A new date and a new panel of judges have yet to be determined.

Prosecutor spokesman Mahmoud el-Hefny told the state news agency that Mubarak will remain in custody during investigation into three corruption cases. Prosecutors are looking into accusations that Mubarak and his family pocketed state funds designated for upkeep of the presidential palaces.

They are also investigating charges that he received gifts from state media organizations, as well as another case in which he is accused of profiteering from his public office.

Lawyer Mohammed el-Damati, who represents families of those killed in the uprising, said although the court decision followed the letter of the law, the court could have used its discretion and kept him locked up in this case on grounds that he might tamper with evidence or pressure witnesses if released.

He said he will file a request to the prosecutor general to appeal the decision.

“It doesn’t matter what else he is being held for. What matters to Egyptians foremost are the charges related to killing of revolutionaries,” el-Damati said. “Political accommodation is acceptable in cases like these ... otherwise, things will blow up.”

Calls to Mubarak’s lawyer were not immediately returned