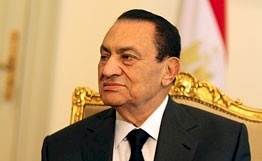 CAIRO — Hosni Mubarak, the Egyptian autocrat forced from power by the throngs in Tahrir Square two months ago, spoke for the first time since then in an audiotape broadcast on Sunday, denying that he and his family had amassed wealth overseas and defending his honor and legacy
The satellite network Al Arabiya, which obtained the five-minute tape, said it had been produced on Saturday after tens of thousands of demonstrators gathered again in Tahrir, Cairo’s central square, demanding that the military council that replaced Mr. Mubarak speed up its investigation into his wealth.
That rally, the first of such magnitude in weeks, ended in the deaths of two demonstrators at the hands of the security forces. The square was emptier but tense on Sunday, with trash, barbed wire and the burned-out hulks of military vehicles. The military had so far not carried out its threat to clear out the demonstrators by force.
Mr. Mubarak, 82, and his wife and two sons have stayed at his weekend home in the Red Sea resort town of Sharm el Sheik, forbidden from leaving the country. The tone of his taped remarks was of a man still stunned that his nation had ever come to think ill of him.
I have been pained and am still in pain because of what I have been subjected to, my family and I,” he said, “from unjust campaigns and false allegations aimed at hurting my reputation and questioning my integrity, stances and military and political history, through which I have striven for the sake of Egypt and its sons in war and in peace.”
The 18-day protest at Tahrir Square in January and February ended in Mr. Mubarak’s being forced out, after three decades of leadership that included rights abuses, corruption and antidemocratic practices. The protest became the icon of the Arab spring, a shining example of a Middle Eastern nation rejecting fear and demanding decent governance.
But the revolution has been slow to produce the results that people expected, and the renewed demonstrations on Friday and Saturday were aimed at speeding up the process. In particular, the crowd demanded accountability for the lavish life of Mr. Mubarak and his family as he led this impoverished country of 85 million.
It has been widely rumored but unproven that he has salted away millions — some say billions — of dollars overseas while more than a third of the Egyptian population survives on less than $2 a day.
It was that accusation that Mr. Mubarak, in his audiotape, sought most to counter. He said that neither he nor his wife had a foreign bank account and that no one in his family held foreign property.
He said he authorized the prosecutor general to ask countries for any proof that he or his wife, Suzanne, or sons Gamal and Alaa, both wealthy businessmen, owned any real estate or property, commercial or private, beyond Egypt’s borders.
“I can no longer stay silent in the face of the continuous campaigns of falsehood, slander, defamation and the continued attempts to get at my reputation and integrity and questioning the reputation and integrity of my family,” Mr. Mubarak said.
Announcements by the public prosecutor on Sunday suggested that the urgency of the crowd’s demands on this issue had gotten through. The office said that Mr. Mubarak and his two sons had been summoned in an embezzlement inquiry and that his comments on television would not affect the investigation.
It said further that Mr. Mubarak’s former prime minister, Ahmed Nazif, had been detained on suspicion of corruption, illicit gain and graft, and had been remanded for 15 days.
The public prosecutor also said it would investigate complaints that Mr. Mubarak and his two sons were linked to the violence during the 18-day protest in which several hundred people were killed.
Mr. Mubarak implied in his statement that he would seek legal action against those who had besmirched him.
“I reserve my full legal rights toward all those who have deliberately tried to get at my reputation and the reputation of my family domestically and abroad,” he said.
It was noteworthy that after decades of having Egyptian state television at his beck and call, Mr. Mubarak used the Saudi-owned Arabiya to deliver his message.
Many Egyptians seemed stunned and unconvinced by Mr. Mubarak’s self-defense.
Mohammad Bassiouni, who came to Tahrir Square on Sunday, called the speech “threatening” and worried that it could be part of a counterrevolution. He said Mr. Mubarak seemed to want through his comments to get people back out in the square, leading to more violence between demonstrators and the security forces.
“He is a liar, and he is making things up to make the army and the people enemies,” he said.
Hisham el-Serrougi, an elderly man standing on a major Cairo bridge, said he heard the speech on television.
“If he were standing in front of me,” he said of the former president, “I would say to him, ‘You are a thief.’ He says he will prosecute people, but it is the people who will prosecute him.”
Wael Ghoneim, the young Google executive who played a central role in organizing the protest movement, reacted to the speech on his Facebook group page: “Mubarak was pained by the unjust campaigns against him and his family, but was not pained by the death of hundreds of thousands of Egyptians from disease and hunger and the death of more than 500 people by the bullets of his police and the torture of tens of thousands in his prisons,” he wrote. “This is something to be ashamed of.”
Mona El-Naggar and Liam Stack contributed reporting