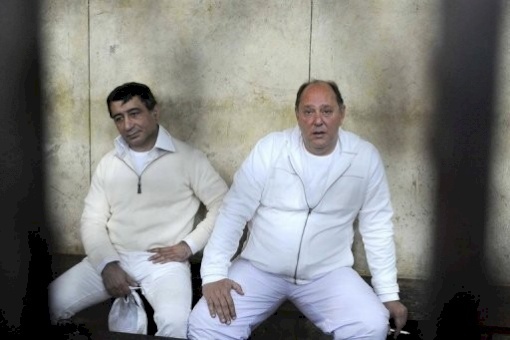 CAIRO — Egypt's former tourism minister Zuheir Garranah was jailed for five years on Tuesday on charges of corruption, a justice source said.
Garranah, who was sentenced along with two businessmen, was charged with wasting public funds worth 51 million dollars, after authorising the sale of state-owned land for well below the market price.
He is the second minister who served under toppled president Hosni Mubarak to be jailed for fraud, as part of a sweeping probe into corruption by the country's new military rulers.
Garranah is said to have ordered the sale of 305 million square metres -- some of which was oil-rich -- to businessmen Hisham al-Hazeq and Hussein Segwani for one dollar per square metre for tourism projects.
He was detained on February 17, less than a week after a popular uprising forced Mubarak to step down and hand power to the Supreme Council of the Armed Forces.
The trial of corrupt officials, including Mubarak, was a key demand of protesters.
On Thursday, a court sentenced once feared Egyptian interior minister Habib al-Adly to 12 years for corruption.
Adly, who ran Mubarak's security services for more than a decade before the strongman's overthrow in the face of 18 days of mass protests, was convicted of money-laundering and illicitly enriching himself while in office.
He faces a second trial on charges of ordering police to shoot protesters, and a third alongside the former premier and finance minister over a deal with a German firm to supply Egypt with licence plates at allegedly inflated prices.
Mubarak is currently under arrest in a hospital in Sharm el-Sheikh, while the military mulls moving him to a prison hospital in Cairo.
His two sons Alaa and Gamal, along with dozens officials and businessmen associated with the former regime are being detained in Cairo's notorious Tora prison which housed political dissidents during in the Mubarak era.
The $10 billion a year tourism industry accounts for more than a tenth of the country's GDP and employs more than 12 percent of its workforce.
More than 14 million tourists visited Egypt in 2010, a record number, with around a third of them hitting the Red Sea Coast.
The vital industry has weathered regional unrest before, including after bombings in Sharm el-Sheikh in 2005 that killed 88 people