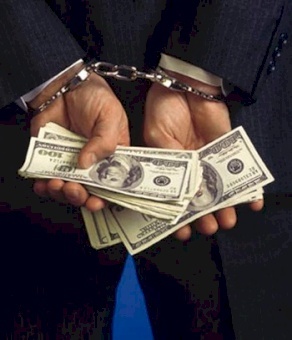 Persistent corruption and other financial malpractices have cost Arab countries nearly $1trillion, which otherwise could have largely boosted the per capita income of citizens, according to a regional anti-corruption group.
The losses accounted for nearly a third of the total income earned by the Arab countries between 1950 and 2000, said the Arab Anti-Corruption Organization (AACO), an independent civil institution with offices in Britain and Lebanon.
AACO made the estimates at a rare anti-corruption conference held in Cairo this week under the title “Towards a strategy to combat corruption in the region.”
“The Majority of Arab countries are suffering from corruption and other financial offences, which have created a weak state unable to tackle problems,” AACO Secretary General Amer Khayyat told the conference.
“Corruption has cost the Arab countries $1trillion…these funds could have increased the citizen’s income by nearly $200 a year, supported anti-poverty efforts and allowed the region to achieve self-sufficiency in food and water.”
Quoted by Arabic language newspapers in the region, Khyyat put the combined Arab income from oil sales and other exports at nearly $ three trillion during 1950-2000. Around $one trillion has been spent on development projects.
“About $1trillion has been spent on arms purchases and the rest has been lost illegally because of widespread corruption and other financial offences.”
Khayyat said several financial institutions and sovereign wealth funds in the region, some of which are among the richest in the world, “are not subject to auditing or any other sort of accountability except the Kuwaiti fund.”
Another speaker at the two-day conference said corruption in the Arab region is prevailing in both the public and private sectors.
“Corruption has become a serious phenomenon that is threatening the citizens’ life, freedom and dignity... it is also weakening their allegiance to the nation and increasing the state of frustration and despair among them,” said Rifaat Faoury, Secretary General of the Arab Organization for Administrative Development.
“Corruption is pervading both the public and private sectors... there should be efforts to support the auditing and transparency systems in the Arab countries and to remove all political hurdles that are preventing non-government parties from participating in anti-corruption action... we also call upon all regional governments to devise clear national strategies to fight this phenomenon.”