AMAN launched on this Monday in Ramallah and Gaza its “Integrity and Anti-Corruption Report 2014" during its 11th annual conference under the theme “Absolute Power…Absolute Corruption” attended by Dr. Rami Al Hamdallah, the Prime Minister, and representatives from the government, NGOs, the media and those interested in anti-corruption issues in Palestine.

Mr. Abdel QaderAl Husseini,Chairman of the Board of Directors (AMAN), said in his opening speech of the conference following welcoming the attendees that the year 2014 witnessed an Israeli escalation and reached its climax by launching an aggressive war against the Gaza Strip. Such aggression generated new challenges related to the management of relief operations and reconstruction and that required confronting new forms of corruption. Those forms emerged as result of receivingcomplaints on the lack of justice in the distribution of aidswithin the Gaza Strip. As a response, AMAN launched its Clean Hands Campaign under the theme "Delivery of Aidsto Beneficiaries is our Responsibility."

Al Husseini called for parties of the Palestinian reconciliation to promptly activate the Legislative Council and to resume its sessions. He said that the absence of the legislative role will keep the Palestiniananti-corruption system limping due the fact that the absolute power means an absolute corruption.

In his speech he delivered on the occasion of holding the conference of launching the annual report of corruption, Dr. Rami Al Hamdallah, the Prime Minister, said that corruption report is an important step to highlight aspects that need remedies. The Prime Minister stressed that the government intention is to be open to various regulatory authorities, and that all official ministerial and non-ministerial institutions aresubject to accountability and control, including official regulatory institutions.

Dr. Al Hamdallahadded thatthey have releasedthe National Strategic Plan on Combating Corruption in partnership with the Anti-Corruption Commissionand official and civil institutions. He requested all the institutions to contribute and participate in implementing its items.

In connection with reconstruction efforts, the Prime Minister said that Hamas should enable the government to work in the Gaza Strip for the actual start of reconstruction process. Yet, funding entities require our presence in the Sector, and we are determined to restore the national cohesion despite all the complications. Prof. Peter Molema, Head of Office of the Kingdom of the Netherlands to the Palestinian National Authority, delivered a speech on behalf of the international partners thanking and praising AMAN and commending the anti-corruption efforts in Palestine.

The conference was held using video conferencing,and then it was resumed its agenda in two separate sessions: one in the West Bank and the other in the Gaza Strip. The Secretary-General of the Legislative Council expressed his admiration on the diagnosis of issues presented by the report and that it shed the light on the issue of disruption of the Legislative Council. Yet, he mentioned that it was tackled unassertively and was not based on the identification of elements led to disruption whereas the three powers are nonexistent; an issue that would prejudice the nature of the Palestinian system. He indicated that it would be better if the report includes a special chapter on the political corruption, so as to be able to send all the political criminals to trial.

In his turn, Mr. Ismail Mahfouz,Chairman of SAACB,agreed with Mr. Madhoon’s view regarding the style of drafting of the report. He looks at it as more polite and was generalized rather than being specified. Yet, it fits the complex climate experienced by our Community institutions

During the first session in Ramallah, Dr. Azmi Al Sha’abi, AMAN Commissioner forCombating Corruption, and Ms. Abeer Musleh, Head of Research Unit, delivered a presentation on the findings and recommendations of the Corruption Report of 2014. The presentation identified that one of the major challenges facing anti-corruption efforts is the fact that the Israeli occupation steals our money amid a lack of transparency regardingthe Authority earnings. The occupation oversees its collection management, and protects some corrupt or fugitive criminals convicted of committing corruption crimes. Additionally, the cost of purchasing health service is a burden on the health budget. Other challenges also include the ongoing mishandlings in the use of government vehicles and waste of public funds against flimsy control and accountability measures in the General Directorate of Licenses. 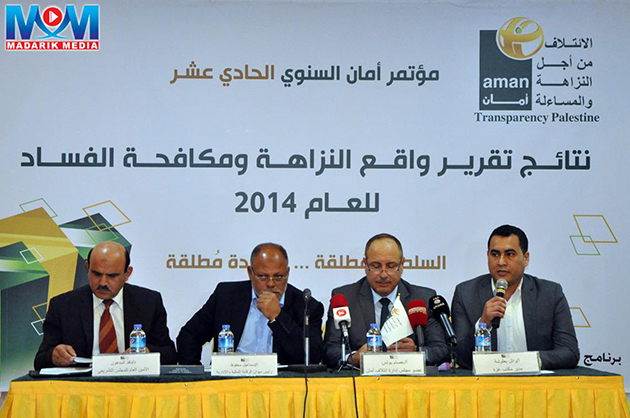 The presentation tackled the point that the most prominent forms of corruption, according to complaints submitted to the Anti-Corruption Commission during 2014, were nepotism, abuse of power and prejudice of public funds by 50% collectively; whilst bribery remained in minimal by 5%.

AMAN annual on corruption indicates that citizens got the impression that nepotism is at the top of their concern and it accounts for their attitudes toward the increase of corruption suspicions.

The Israeli occupation and division and internal friction continue in imposing negative impact on the national system of integrity and anti-corruption efforts.

Referral of officials to the Corruption Crimes Court

Corruption Crimes Court sentenced three officials to be guilty- some of them were general directors. The survey of 2014 showed that 6% of the citizens in the West Bank paid a bribe; while in the Gaza Strip 19% of respondents surveyed said that they paid a financial bribe.

Food and medicine Spoilage, tax evasion and smuggling... crimes on the rise and ineffective remedies

34 cases on violating the Consumer Protection Lawwere referred to the Prosecutionof Economic Crimesduring 2014. But this figure does not reflect the reality on the ground in terms of the spread of this crime. To ensure the effectiveness of the policy of deterrence, AMAN requests disclosing the names of people or companies that committed these crimes, and type of crime and item as soon as referring the case to the competent court.

16 employees were appointed in senior posts in 2014 amid the absence of free competition and equal opportunities in recruitment.

There are nearly 1000 vacant senior posts in the civil service.

There is a lack of transparent standards in processes of appointing certain senior staff "special and senior grade" due to the lack of the principle of competition; no announcements were published regarding those vacant posts.

AMAN report states that certain non-ministerial government institutions are still outside the scope of official accountability. It turned out that certain institutions assigned salaries and privileges given to their officials that are inconsistent with the financial realities of PNA. Some officials did receive a salary exceeded $10,000 per month.


The energy sector ... Exhaustion of publicfunds

Net lending item in the general budget showed a rise in actual spending by half compared to estimates of the budget (from USD 600 million to USD 956 million).

The politicization of the civil service threatens the goodmanagement of the public funds: the policy of appointment on political grounds led to random appointments without actual need for them. This led to an increase in the number of employees in the civil and security institutions and becomes a burden on the general budget.

General budget but not designated to the public

The Ministry of Finance ceased to issue the citizen's budget of 2014. The Minister of Finance did not respond to the invitation of the National Team to attend to the special session designated to identify the objectives of the budget and plans of 2014 and their grounds.

At the end of the report, AMAN highlightedthe Palestinian government, the Ministry of Planning and Anti-Corruption Commission the need to develop a comprehensive national plan to combat corruption. Such a plan is to be developed with through the involvement of different sectors. 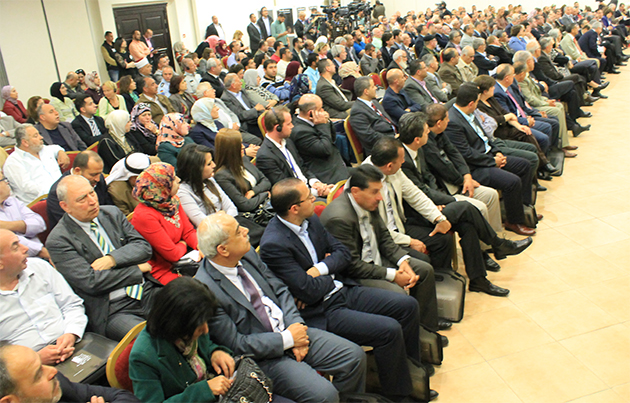