Youth Movement holds Palestinian Legislative Council and Ministry of Health to account, asserting demand for construction of a hospital in Rafah governorate 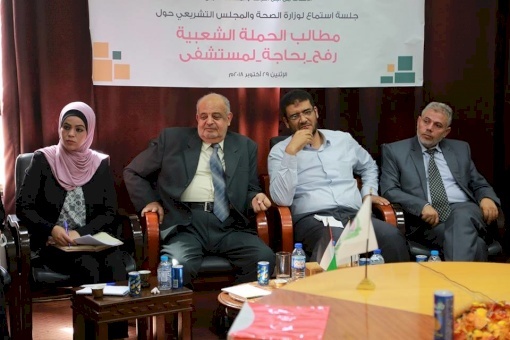 Gaza – In support of the public campaign and key demand dubbed “Rafah Needs a Hospital”, the Coalition for Accountability and Integrity (AMAN) held a hearing with representatives of the Palestinian Legislative Council (PLC) and Ministry of Health (MoH). Immediately after the hearing session, the MoH decided to establish a committee, including representatives of the Ministry, Friends of Rafah Medical Complex, and Rafah Movement for Demanding the Construction of a Hospital. The committee will be tasked to submit a report on the Rafah community’s primary healthcare needs in the current period. Later, the committee will hold a meeting to develop a plan for improvement of health service provision in the Rafah governorate.

The MoH recommendations were triggered by the repeated promises it had made to the Youth Movement, which represents and reflects the Rafah population’s claim for their right to have an integrated hospital. This facility should deliver healthcare services that meet the increasing needs and growing population of the Rafah governorate. For as long as eight years, the Rafah local community needs have not been fulfilled. All pledges and promises made have never seen light of the day.

The Youth Movement made several demands, namely: keep healthcare services away from political rivalries; develop a special plan to recruit funding for construction of a hospital in Rafah; provide needed support to the Friends of Rafah Medical Complex so that it receives a duly issued licence to initiate all relevant formal procedures; press for increasing the MoH budget, particularly budget line items earmarked for the health sector development and basket of services; develop a rescue plan for primary healthcare services; reorganise health service delivery; rehabilitate existing healthcare centres in the Rafah governorate; and join forces with private and community health centres. Ensuring openness to the public, information and plans developed by the MoH should be made publicly available.

The hearing session brought together activists of the Youth Movement as well as representatives of civil society organisations and media outlets. Participants mainly inquired about the PLC position towards the demand for construction of a hospital in the Rafah governorate. They asked if the PLC had implemented interventions, placed pressure on, or held to account the MoH in the Gaza Strip for the causes of reluctance to construct a general hospital in Rafah. Participants wondered why the needs of 250,000 residents in this southern border area were being neglected. Good quality healthcare services are lacking, particularly for the poor and vulnerable groups. Participants also inquired about the measures taken by the MoH to respond to the campaign’s demands.

Health situation in the Rafah governorate

In the Rafah governorate, health services are provided by the Palestinian government and the United Nations Relief and Works Agency (UNRWA). Government health services are delivered by hospitals and primary healthcare clinics of the Abu Yousef al-Najjar Hospital. The latter is challenged by a substantial shortage of hospital beds compared to the population – just 1.3  beds per 1,000 people. The hospital is forced to transfer patients to other governorates. There is a critical need to provide at least 300 hospital beds.

The Rafah governorate also lacks a CT Scan system, intensive care units, and adequate medical staff. According to the MoH 2016 annual report, in comparison to other governorates in the Gaza Strip and West Bank, Rafah is affected by a deteriorating health situation and low quality health services delivered to members of the local community.

Dr. Khamis al-Najjar, a parliamentarian and member of the Health Sector Monitoring Committee, provided an overview of the historical evolution of health services and current needs of the health sector in the Rafah governorate. Dr. Al-Najjar asserted that the PLC supported demands of the public campaign. He said that delayed construction of a hospital in Rafah was attributed to the internal Palestinian political divide and PLC’s weak role and inadequate influence on the MoH and Ministry of Finance of the National Consensus Government.

A representative of the MoH confirmed that the Ministry’s role was to save and recover health services. The Ministry strives to prevent a collapse of the health sector under current difficult circumstances and significant challenges, including shortage of medicines and medical supplies, as well as a general deficit of the MoH operating budget. The MoH representative emphasised that the Rafah local community had the right to claim access to health services. A development budget line item should be allocated to construct a hospital in the governorate. To this avail, the MoH was cooperative and signed a memorandum of understanding with the Friends of Rafah Medical Complex. Accordingly, the group has the power to raise funds for construction of the needed medical complex. The Ministry was committed to provide an operating budget once the complex is built.

In his comments, a representative of the Aldameer Association for Human Rights emphasised that the MoH should network with all health stakeholders, including civil society organisations and private sector. International support should also be prioritised, ensuring that funding is recruited to fulfil current needs.

Most interventions and questions raised by participants in the hearing session stressed that demands of the Rafah public campaign should be a top priority of the MoH. Interim plans should be developed with a view to promoting resilience of the Rafah local community in times of disaster. Key health services should be provided, including a cardiovascular surgery unit, intensive care unit, and a hospital or health centre with a morgue. Corpses should not be kept in cooling systems for vegetables or ice cream as was the case during the 2014 war on the Gaza Strip.