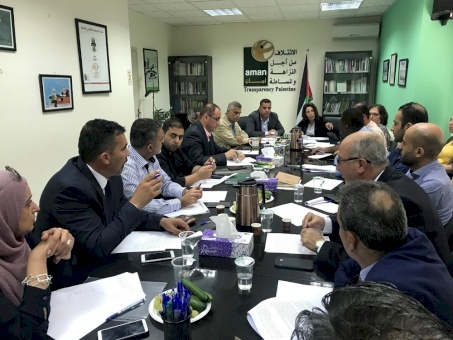 Dr. Ahmed Abu Dayyeh, author of the report, made a presentation on the Law by Decree on Public Procurement No. 8 of 2014, which entered into force at the end of June 2016. Setting the legal framework for all public procurement processes, the Law by Decree provides a set of controls, which ensure that its objectives are realised. The Law by Decree aims to (1) procure supplies, works and services at the most favourable rate, contributing to rationalising expenditures and maintaining quality assurance; (2) encourage participation in the public procurement process by qualified suppliers, contractors and consultants; (3) allow equitable opportunities without discrimination and provide fair and equal treatment for all bidders and consultants; and (4) ensure materialisation of transparency and integrity in the procedures and implementation of the public procurement process.

By various means, some government bodies and public institutions have sought to exclude themselves from the scope of enforcement of the Law by Decree. For example, the Alimony Fund of the Hebron Governor’s Office sought to adopt special procurement regulations on its own. Other government bodies, such as the Palestinian Broadcasting Corporation, attempted to obtain a decision from the President to exclude them from law enforcement. Under the pretext of their specialised nature, these bodies sought the approval of direct procurement of needed supplies. Some government agencies continued to implement the provisions of older legislation, including the Law on Public Supplies and Law on Public Tenders. The report also shows that direct procurements continue to be conducted on a widespread basis by many line ministries and government bodies.

Based on decisions made by the Council of Ministers, direct procurements required considerable amounts of resources, amounting to millions of shekels. In addition, Abu Dayyeh provided an overview of 13 Council of Ministers’ decisions, which were issued between the time the Law by Decree was enacted until February 2018. These decisions permitted direct procurements in all aspects. It is worth noting that monitored procurements did not fall squarely within the conditions and controls provided by Articles 28 and 106 of the relevant Bylaw. The majority of procured commodities were available, subject to competition, and did not fall under the states of emergency prescribed by the Law by Decree. A case in point is the procurement of hotel services for amounts in excess of US$ 100,000 by the Higher Council for Youth and Sports. In addition to purchasing seedlings and fodder seeds by the Ministry of Agriculture, the Ministry of Education and Higher Education printed schoolbooks in amounts exceeding NIS 20 million. The Council of Ministers also purchased videoconference equipment. These processes run counter to the objectives of the Law by Decree, namely, rationalising expenditures, promoting fair competition, allowing equitable opportunities to all bidders, and consolidating the principles of transparency and values of integrity in the public procurement process.

In short, the government bears responsibility for monitoring the implementation of the new reform policy and preparing all government bodies to apply the new processes set by the new Law by Decree, promulgated on 26 June 2016. It should be noted that the institutional and functional setup of the Higher Council for Public Procurement Policies still needs to be finalised. Needed budget allocations should be secured to help the Council carry out its tasks. In particular, the Council has to approve consolidated forms of contracts and standard documents of tenders. It should activate the Unified Web Portal for Public Procurement, where tenders are posted. However, current practice shows that tenders continue to be published on the portals of the Directorate General of Public Supplies and Dispute Resolution Unit. Although it is the central body in charge of public procurement, the Council’s dysfunction has debilitated its role of supervision and oversight of public procurement processes.

A representative of the Higher Council for Public Procurement Policies opposed the forgoing diagnosis, particularly of the Public Procurement Portal. For more than a year and a half, advertisements have been posted on this portal. According to the Council’s representative, the fault lies with the directors of government bodies and how serious they are in complying with the Law by Decree. The Council has already organised dozens of workshops, targeting staff of line ministries and government bodies. A representative of SAACB asserted that some gaps were not addressed by the Law by the Decree on Public Procurement. Some definitions also need to be further clarified.

The Director of the MoEHE Tender and Procurement Department explained that the curriculum modification resulted in late advertisement of the tender for schoolbooks of all 1-12 grades. The exception was based on a request submitted by the Minister of Education to the Council of Ministers. Requests for price quotations were sent to seven print shops. Accordingly, the tender was divided on a regional basis in the West Bank, Jerusalem and Gaza Strip. A contract was awarded within one week, instead of the usual period of 60 days.