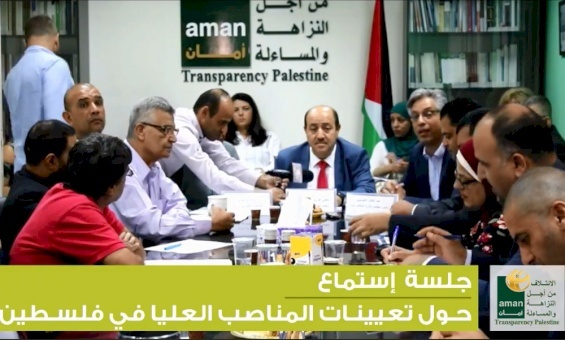 Ramallah – In a hearing session with the President of the General Personnel Council, Mr. Mosa Abu Zeid, on appointments to senior positions, the Coalition for Integrity and Accountability – AMAN called upon the government and president to halt the current procedures for appointment to senior positions. AMAN explained that current procedures are in contradiction with the Basic Law, which prescribes for equal opportunity and completion. AMAN also appealed to the Ministerial Council to ratify and enforce the job descriptions for senior and special positions without delay and called for the drafting of a law or regulation to establish a “Public Sector Good Governance Committee” and to define the procedures for vacancy announcement and application to senior positions (both civil and security) in the public sector. AMAN also reiterated the necessity to review complaints relevant to recruitments in the public sector and to prepare a code of conduct for the senior posts in the public sector to compel holders of such positions to adopt transparency, integrity and fairness in appointments to public posts.

The session was part of the #Merit Campaign led by AMAN to learn the key developments in the General Personnel Council’s activities and achievements on senior positions. This includes advertising vacancies, organizing recruitment competitions, application of specific and clear criteria, and official oversight of all of the stages of appointment. This stems from the right of citizens to access information from proper sources, and the adoption of job descriptions, which the GPC developed and submitted to the Ministerial Council to regulate senior positions and subjugate them to GPC and reduce corruption in holding and administering senior posts.

The Chairman of AMAN’s Board of Directors, Mr. Abdelqader Al-Husseini participated in the session and commended the openness of the President of the General Personnel Council the civil society and community accountability. He reiterated that without transparency, politicians manipulate the law and find justifications rather than abiding by criteria and deterrent procedures. He also explained that any exception creates a necessity to discuss this issue. The session was also attended by journalists, researchers and employees from the private and public sectors and civil society institutions like MIFTAH, Center for Defense of Freedoms as well as officials from the General Personnel Council, the Palestinian Central Bureau of Statistics, the Palestinian Monetary Authority, the Presidency Office, the Investment Promotion Commission, the Land Authority, the Palestinian Fund, State Audit and Administrative Control Bureau, Palestinian Alimony Fund, Medical Council and number of ministries, including the Ministry of Agriculture, Ministry of Interior, Ministry of Jerusalem Affairs, Ministry of Justice and Ministry of Education and Higher Education.

Diagnostics of Appointment to Senior Positions

AMAN presented a paper diagnosing the current lack of transparency and unclear criteria as well as non-application of the principle of equal opportunities in appointment to senior posts in the public sector. Most appointments were made without fair competition or vacancy advertisement in the papers, furthermore, no competitions were organized and appointments were made without job descriptions or any official oversight to ensure that applicants fulfill the criteria for holding such positions.

In 2017, a president was appointed to the Higher Judicial Council to the Supreme Court and a deputy thereof were appointment without proper application of the Judicial Authority Rate. Furthermore, 8 deputy ministers and senior staff of non-ministerial public agencies were nominated in, for instance, the Ministries of National Economy, Finance and Planning, Tourism and Antiquities, Labor, Education and Higher Education and in SAACB, Risk Mitigation and Agricultural Insurance Fud, Wall and Colonization
Commission. Additionally, 21 assistant deputy ministers were appointed to different agencies without any competition or announcement, relying solely on nomination by the head of ministry or agency. The status of minister was granted four times in the same year: Head of Land Authority, General Supervisor of Official Media, Advisor to the President on external and international relations, advisor to the president on the affairs of the Arab and Islamic Funds without any legal reference or criteria that regulates such ranks. Such appointments lead to financial and other privileges in addition to salaries and pension payment. The President’s Office had several appointments while 7 staff members were promoted to Directors General and an eighth to assistant deputy minister and ninth to deputy minister. There were no clear mechanisms, advertisement or completion. In the diplomatic corps, 6 nominations of ambassadors were made without any competition.

SAACB unveiled in its annual report of 2017 violations to the Law of Diplomatic Corps and its executive regulations. The decision of the President and resolutions of the Ministerial Council on contracting experts and employees were not enforced in violation of the law. Extension of the term of a number of ambassadors of the diplomatic corps after they reached 60 years of age without any obligation to work in the Ministry.

Pitfalls in the Occupancy of Senior Posts

Advocate Bilal Al-Barghouti, Legal Advisor of AMAN Coalition stated the gaps in the current system for appointment to senior positions, mainly the discretion power given to decision-makers and lack of nomination and selection mechanisms, which politicize appointments to such positions and facilitated corruption. Furthermore, it leads to the propagation of nepotism, favoritism, and political parties’ quotas in such appointments to guarantee personal loyalty. He also mentioned that the multiplicity of legal references of non-ministerial agencies and their dispersed affiliation between the Ministerial Council, the competent body, the Presidency Office and the PLO affected the procedures applicable to the appointment of their heads and allowed for violation of applicable laws. Additionally, the delay in ratifying the job descriptions of the majority of such appointments and subsequent consequences like vesting several functions to the same person and lack of criteria for the allocation of a grade to the occupant of the post. Consequently, the decision-maker decides upon his/her own discretion the grade and its privileges, perks and financial rights. This exhausted the public treasure and led to unclear definition of the tasks entrusted to such posts.

Appointment to senior positions trapped between exception and applicable procedures

Minister Mosa Abu Zeid started his response by commenting on the development in public positions open to all citizens. He explained that the problems related to lower public positions are minimal, compared to the progress achieved. He mentioned that 99.3% of criteria and procedures were already developed. There were 14 violations, which were addressed. He also mentioned that there were 70 specialized trainers to train the newly appointed staff upon their affectation to the post to help them develop their careers. Supervisors participate in the assessment of employees in all state institutions.

As for senior posts, appointment was based on equal opportunity and applicable procedures in 97% of cases, as stated by Abu Zeid, who explained that GPC applied the Civil Service Law and the regulations issued by the Ministerial Council in 2012 to organize the process. GPC applies such criteria, mainly Article 17, which regulates the right to nomination to senior posts: Head of a government department may recommend to the Ministerial Council appointment to Grade One Posts, for existing employees in office for 14-15 years, who fulfill the terms of such post as prescribed in the approved job description. The nomination shall be submitted to an administrative committee comprising the competent ministers, who shall examine it for consistency with the criteria adopted by the Ministerial Council prior to submission to the Head of the Ministerial Council and subsequently to the President for approval’. Abu Zeid denied affirmatively the existence of any cases of due process nomination and then replacement with other names. For Grade B and Grade C posts, they must go through technical interviews in seven areas of knowledge and undergo a theoretical and practical training in addition to another training abroad for a whole year to fulfill the requirements.

Abu Zeid refused to comment on the appointment of a senior official’s daughter to a Grade C post without merit and the fuss that followed the publication of her appointment decree on social media.

Jehad Harb, Director of Research at the PLC, commented on the extension of terms of some deputy ministers or their reappointment although they have already reached retirement age while others are forced into early retirement while they are still in their thirties and full capacity. He stated that the basis of recruitment is loyalty while others depend on qualifications. He explained that lack of clear criteria and transparency led to conflict among those aspiring to occupy such senior posts and killed the ambitions of ministries’ human resources. It also opened room for blackmailing of candidates.

Abu Zeid also denied the extension of contracts of staff above sixty years old. He mentioned that the Pension Law allowed the head of a government department to contract retirees for two years without any extension provided that such contract is based on the difference in salary between the post’s pay and the retirement pay. This is different from contracting a retiree with full pay he/she received before retirement.

The Coalition launched the Hashtag #Senior_positions_Merit on different social media, which will run for several months to raise public awareness of the problems of occupying senior positions in the public sector, and of suspicion of Wasta and favoritism. The campaign also aims to involve citizens in collective claims for proper policies and procedures and the promulgation of a regulation to establish the public sector good governance committee to review appointments of candidates to senior posts. Citizens also need to mobilize for the ratification by the Ministerial Council of the job descriptions of senior officials