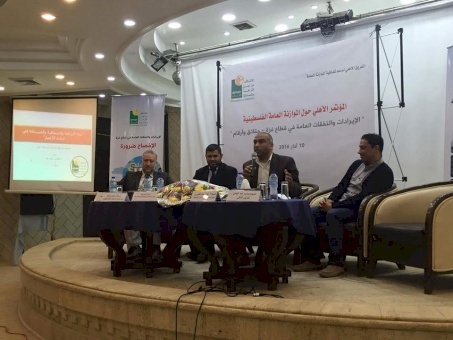 Gaza: Consistent with efforts exerted by the Coalition for Integrity and Accountability-AMAN and the Civil Society Team for Public Budget Transparency (CSTPBT) in promoting transparency of the public budget, a conference was held on March 10, 2016, entitled “The Palestinian Public Budget: Gaza Revenues and Expenditures, Facts and Numbers”. The conference was attended by representatives from civil society organizations, researchers, and financial experts, as well as other interested citizens.  Thisevent and other similar activities carried out by AMAN and the CSTPBT aim  to promote principles of transparency with emphasis on financial transparency; public participation in setting scenarios for the public budget; familiarize specialists with the financial data of the budget; as well as publication of information relating to public affairs.
Mr. Majdi Abu-Zaid, Executive Director-AMAN, in his address, stated that continuation of the internal political division is the main reason for the absence of accountability. Despite that, the CSTPBT, in its commitment to promote transparency, community participation, and monitoring management of public fund, persisted in calling for and holding accountability sessions.
The conference began with the CSTPBT presenting its views regarding the 2015, and 2016 budgets, followed by a session entitled “Facts and Numbers” on reconstruction.The final session covered the Gaza Strip’s (GS) revenues and expenditures. 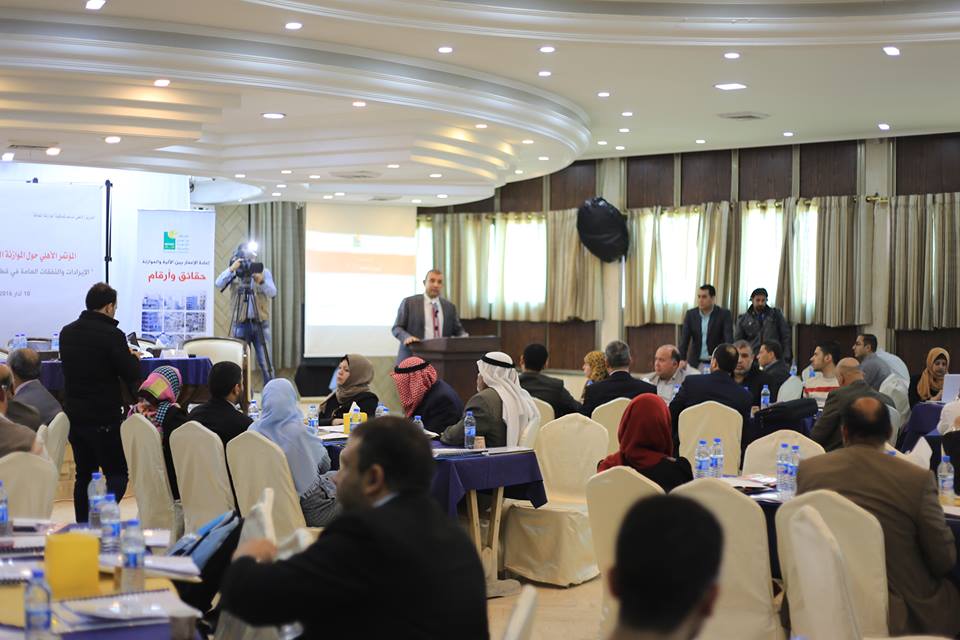 Community discussion on the public budget

During the first session, Dr. Wa’el Al-Dayya, member of the CSTPBT, presented the team’s stand from the scenario followed when preparing the public budget. It included an analysis, prepared by the team, of the government’s commitment to: the governing legal framework; provisions of the Palestinian Basic Law; Budget Law No. 7 for 1998; as well as other related legislations, in respect toacknowledged transparency criteria for public budgetsduring preparation and implementation of the budget.  This was followed by a detailed presentation of the 2016 budget items as well as an analysis of its focal points.  He concluded his presentation by illustrating the team’s main conclusions singling out a main concern, stating that the salary and wage item continues to be a burden on the budget and in need of “refinement” and further transparency. He added that this is especially important due to the fact that, relatively speaking it constitutes the largest part of the Palestinian National Authority’s (PNA) budget, and due to the ambiguity which surrounds it, especially in regard to: the number of employees on the payroll who are outside the approved administrative formation of the government, as well as the high salaries of certain groups.
Based on the above, he said thatthe team put forth recommendations emphasizing the importance for better transparency of the public budget;the need to provide more accurate information on revenues and expenditures relating to the GS, and the need to add an annex on allocated funds for the reconstruction in Gazato the proposed budget. 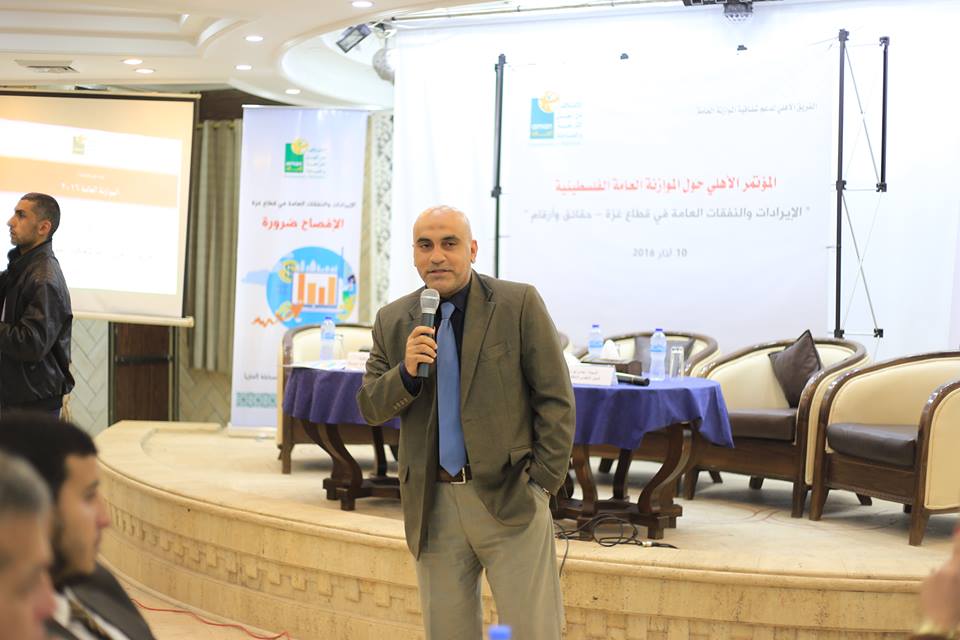 This was the title of the second session due to the fact that the issue of reconstruction was placed in a “black box”, i.e., surrounded by ambiguity and lack of transparency despite being included in the public budget. Moreover, the implementation mechanism has been very slow indicating lack of integrity, transparency, and accountability.  The session began by presenting a researchreport, prepared by AMAN, by researcher Mr. Nahidh Eid,on the implementation mechanism of the reconstruction operation in the GS.  Report results indicated a general weakness in the environment of transparency, integrity and accountability in all phases of the reconstruction process in addition to the absence of the concept of community accountability.  A number of recommendations were concluded by the report epitomized by the need to find methods that enable the public and other related parties in accessing accurate and timely information, by all possible means regarding criteria, conditions for access, general information etc. by which implementation of reconstruction operations is carried out.
For his part, Mr. Majed Saleh, Deputy Director General- Ministry of Labor, who is in charge of reconstruction operations in the GS, stated that the management of these operations depend on the coordinated efforts of related parties represented by the ministry, UNRWA, UNDP, and other Arab Funds who work individually such as the Qatar Charity Society.  This ensures fairness in distribution between affected citizens, according to him.  He also displayed numbers indicating achieved progress, even though it was modest, in the area of reconstruction under the supervision of the ministry.
The session was culminated by AMAN’s presentation of a fact-sheetillustrating the total allocated funds, for the reconstruction, since the first donor conference held after the aggression on the GS and until the present time. The presentation was detailed displaying the total funding requested by the PA clarified in its plan according to sectors; funds pledged by donor countries itemized individually, as well as the total amount received from these pledges and progress achieved within reconstruction projects.
During the discussion period, participants’ questions and discussion focusedon the reasons for lack transparency, ambiguity, and the conflicting numbers presented regarding reconstruction, as well as duplication of service provision for some affected individuals, all at the account of others.  This, in their opinion, indicates lack of integrity among those who are in charge of supervision and control over the process. Or it might indicate to cases of conflict of interest between those who are working on projects and recipients of the services, hence denying others their shares.

Public financial data is presented for the first timeto citizens in the GS; Senior Official parties call for unifying the public budget and for civil society participation in its implementation

Due to the internal political division and poor governance in the GS, financial data concerning the GS has been left in the dark for the past seven years. However, AMAN’s persistence over the years in believing that citizens have a right to access to information as well as its work to promote transparency of the public budget was able to collect information on closing accounts and financial reports for the period of 2008-2015.The information collected was put to use in developing a working paper on the general revenues and expenditures for the GS. AMAN, in its research, also covered the legal and technical aspects of the public budget, which means monitoring and documenting revenues collected, newfees and taxes imposed, in addition to public expenditures spent by the Ministry of Finance onthe GS. Finally, it also covered the public revenue and expenditure statementrelating to the GS and issued by the Palestinian Ministry of Finance under the National Conciliatory Government (NCG).
The third session constituted the most important session of the conference, since it provided new information to citizens and engaged civil society in the diagnosis and assessment of the revenue collection and expenditure disbursement system. In this regard, researcher Osama Nofal presented the focal points and results of the working paper. In his presentation, he covered the legal and institutional framework for the public budget clarifying that post formation of the NCG all measures taken to increase revenues are to be in-line with the Palestinian Legislative Council in Gaza.  He added that the legislative Council approved to work with the 2014 budget and until 2015 without the adoption of a new budget. He also spoke about the analysis conducted on the qualitative and quantitative development in the Gaza budgets for 2008-2014, which he said it turned out to be problematic since public spending is focused on the security sector.He also said that there was a decline in expenditures on the economic and development fields. In addition, he stated that the salary bill in the GS amounts to 80% of the total current expenditures for the period mentioned, and has risen to 90% post 2014. This reflects the uncontrolled trend of directing local revenues to cover salaries, as a priority, hence negatively affecting ministries efficiencies and quality of work due to the lowering of operational expenses and absence of development expenses.
Results of the working paper also revealed that there is a noticeable improvement in the NCG revenues collected in the GS, as a result of importing goods from Israel after shutting down the tunnels. The Maqassarevenues (clearing tax collected by Israel at the borders on behalf of Palestinians) for the GS amounted to 965 million dollars in 2014. This is in addition to the income taxrevenues derived from public shareholding companies and PA employees in the GS totaling a billion dollars; versus expenditure of the NCG on the GS valued at 939.6 million dollars. A surplus of 61.5 million dollars in favor of the public budget from the GS local revenues, with the exception of foreign aid.
The working paper also looked into the double taxation.This burden is shouldered by citizens living in the GS as a result of the multiplicity of tax revenue sources such as taxes imposed by the Ministry of Finance in Gaza, which amounted to 85 million dollars by the end of 2014, in addition to the taxes imposed by the NCG mentioned above.
Several conclusions were drawn by the research working paper summarized as follows: duplicity in the budget; absence of the parliamentary blocs from PLC meetings in the GS negatively affected transparency of the public budget; absence of community discussions regarding the public budget hence absence of financial transparency.  The paper’s recommendations called for unifying the public budget in the occupied Palestinian territories, which requires an end to the internal political division; unifying government institutions, as well as abiding by the principles of financial transparency. Recommendations also stressed thatallowing public participation in drafting scenarios for the budget comes first and foremost; providing opportunities for experts and the CSTPBT to review financial data, hence enhancing transparency of the public budget.
The conference concluded with Mr. Jamal Nassar, PLC member and head of the Public Bbudget Committee at the Council giving his comments on the working paper, where he agreed with the recommendations mentioned. He said is it is vital to unify the budget in order to put an end to duplicity within it. He also stressed the need for civil society participation in the implementation of the budget as a prelude to end the fiscal deficit and to achieve progress in reconstructing Gaza.
Finally, a number of participants debated Mr. Nassar regarding contents of his paper which he presented during the conference, where he spoke of revenues and expenditures of the GS within the framework of the public budget.  In his presentation, he divided the governance period in the GS into two phases. The first, which he called the suitcase phase was intended to define the period where revenues came through tunnels, valued at 50 million dollars.The second phase, he defined it to be the period from 2008-2014, which is the period when Hamas assumed full power noting that this was when the siege on the GS was intensified, and tunnels were shut down. Total local revenues for that period amounted to only 2764 million dollars divided between local revenues, which the government collected, accounting for 36.29% of the total public expenditures, and some grants given to the government by the Hamas movement reaching approximately 34.37%.